A Peeper into Paradises: The glowing, ebullient artifice of England’s Howard Hodgkin, by Robert Hughes

The main events of the past two or three years, so far as the New York is concerned, has been the, rebirth, of European art – mainly young, German and Italian, expressionists in mood and flirtatiously eclectic in tone. The spectrum of achievement runs from mere operators like Salome to deeply serious artists of the calibre of Anselm Kiefer. The fact that an American audience is paying attention to European painting once more comes as a relief, but before attention gets wholly stylised as fashion, it is worth remembering that England is part of Europe and that some English painters have more to offer than other, more loudly promoted figures of the day. One of them is Howard Hodgkin, whose current New York exhibition opened at the Knoedler Gallery last week.

Hodgkin is fifty this year: a diffident man with a tough, discursive mind and a long background in art history, collecting and teaching. There is not a more educated painter alive, and it would be hard to think of one whose erudition was more exactly placed at the disposal of feeling. His paintings look abstract but are full of echoes of figures, rooms, sociable encounters; they are small, “unheroic” but exquisitely phrased.

The space they evoke is closed, artificial, without horizon or other legible references to landscape. One seems to be looking into a box of coloured flats and wings – and marionette stage, behind whose proscenium the blobs and cylinders of colour glow with shivering theatrical ebullience. “Curious,” as the English art historian Lawrence Gowing remarked in a recent essay on Hodgkin’s work, “that no one has recognised in Hodgkin as god given stage designer, a man with a mission to the theatre of enrichment and augmentation.”

Because Hodgkin’s type of abstract flatness admits the eye some way into the picture and identifies the surface as an imaginary opening, it has nothing to do with the idealised flatness of sixties American colour field painting. It hovers on the edge of scenic recognition, tricking the viewer into the thought that just one more clue might disclose a particular room or restaurant, a familiar scene. Sometimes it will. The most spectacular painting in the current show, In the Bay of Naples, 1980-1982, presents itself as a soft hive of coloured blobs, blooming and twinkling in rows, against the dark ground. Lit windows? Strings of restaurant lights? A view from a terrace? Then more specific things appear: a pinkish vertical, another stage flat, turns into a stucco wall; a cobalt patch at the centre, where the vanishing point would be if there were any perspective, resolves itself as a glimpse of sea; the S of creamy green paint that lights the whole painting with its contradictory glare, leaping against the more tentative and modulated speckling of the rest of the surface, is the wake of a speed boat, tracing its phospherent gesture on the night water.

There is a strongly private, autobiographical element in Hodgkin’s work; it refers to friendship one does not know about, to conservations in rooms long since quitted. But it resists transition as antidote. “The picture,” Hodgkin says firmly, “is instead of what happened. We don’t need to know the story; generally the story is trivial anyway. The more people want to know the story the less they’ll look at the picture.” Likewise, the paintings are full of reference to other art, usually of a rather arcane sort. But they seem casually, even inattentively deployed, coming out not as formal homage’s to this or that master but as a function of temperament. Like Bonnard, whose work he reveres, Hodgkin is a fidgety peeper into secular paradises and controllable realms of pleasure. But as befits a painter who makes no bones about his belief in the continuity of pas and present, part of the pleasure lies in the conversation between his work and its sources.

One of the main ones (a parallel text as it were) is Indian miniature painting of which he has long been a collector. The jewelled colours and flattened space of the court miniature, the way it filters all natural detail in order to preserve it within the twining convention of artifice, and above all the sense it provide of looking past the edge of the ordinary world into a privileged domain – all this is echoed and modified in his own small paintings.

But such influences are meddled into a wholly modernist idiom. Hodgkin does to the Indian miniature what Matisse did to Islamic decoration; the source is not simply quoted but transformed. The miniaturist precision of edge and line is replaced by a fuzzy, affable kind or formal system – nursery-toy versions, almost, of the sphere, cube and cylinder those intimidating platonic solids of programmatic modernism. His pigment, however, has an extraordinary range of effect. His work sports in the transparency, density, and sweet pastiness that oil paint can give. Surfeited by colour, twinkling with fields of dots (like enlarged details of a Seurat, betokening light), its casual surface can look clumsy; but that is only Hodgkin playing with the idea of clumsiness, extracting an educated pleasure from the babyish joys of daubing. In fact, his taste rarely fails, and his talent as a colourist remains unmatched amongst living painters. Both place his paintings squarely in the tradition whose praises they modestly sing. 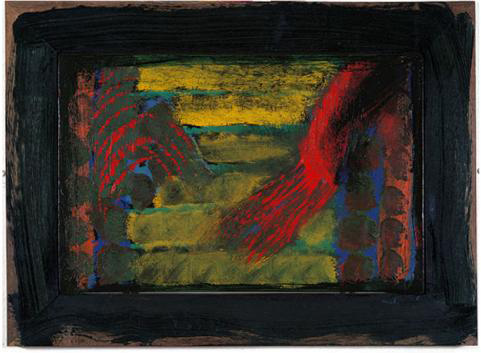