Flirtation with abstraction, by Jackie Wullschlager

In Howard Hodgkin’s ‘Talking About Art’, bold, overlapping planes of colour and columns of thick paint are tightly stacked within a heavy purple wooden frame. Placed halfway through Tate’s new retrospective, the work is a satire: this conversation is going nowhere. Yet in his paintings Hodgkin talks about art all the time. A dialogue begun in 1979 with ‘After Corot’ and continued through ‘After Matisse’, ‘Seurat’s Bathers’, after Vuillard, ‘After Degas’, and ‘After Samuel Palmer’ (2005) speaks of ceaseless engagement with painting’s history. Another group of witty or intriguing titles – ‘Clean Sheets’, ‘Dirty Mirror’, ‘Come Back Dull Care’ – are clues inviting us to talk about Hodgkin’s elusive subjects.

No painter alive treads a more fascinating, tremulous line between figuration and abstraction, or matches an intensity of representation by a reluctance to describe anything. This was true, Tate shows, from the start of Hodgkin’s career. In 1960, ‘Mr and Mrs Denny’, he in brash sunglasses, she with a glazed look, bob up and down like puppets on a stylised sea of blue-cream sails. The mock-pastoral ‘Gardening’ (1963) has Hodgkin’s wife Julia submerged beneath an extravagant décor of flower shapes and discs of lemon, lime and strawberry. In ‘Mrs Nicholas Monro’ (1966-9), a few serpentine brushstrokes and garish circles evoke the memory of a woman stripping after lunch. Exuberant geometry, playfulness, irony, caricature: here are the bright tones and abbreviated figuration of British pop. Yet Hodgkin is already an individualist: here too, in the beguiling all-over patterns, sensuousness, pull between harmony and resistance, is a postwar take on the intimism of Bonnard, Vuillard and Matisse that was to manifest itself as Hodgkin’s most powerful influence.

Which other English painter coming of age in the 1960s so perfectly embodies the vibrant, expressive optimism of that decade while continuing to debate the possibilities, dilemmas, paths and culs-de-sac of European modernism? Freud, Auerbach and Rego were born abroad, Hockney took essential impetus from America, pop-figurative friends such as Peter Blake and Patrick Caulfield did not stay the course with Hodgkin’s mix of lucid consistency and inventiveness. That is why we cannot stop talking about him; why, along with Tate’s red-carpet exhibition, curated by Nicholas Serota, comes not only a catalogue but a handsome volume of prose as lush as his paintings, Writers on Howard Hodgkin (Tate, £14.99), by essayists including Bruce Chatwin, Susan Sontag and Julian Barnes, as well as a sumptuous, indispensable catalogue raisonné, Howard Hodgkin, The Compete Paintings (Thames & Hudson, £60), with quotations from hundreds more.

From such monuments, it takes a moment to adjust to the small scale of Hodgkin’s paintings themselves, hung very far apart on walls dramatically painted eau de nit, mailbag grey and mustard yellow, at Tate Britain’s sweeping main galleries.

“My pictures tend to destroy each other when they are hung too closely together,” Hodgkin warns. Sontag calls each on an arch seducer, whose charms are undermined by the presence of rival seducers, but the real reason is that each is a conversation piece, painted to domestic scale, and putting too many conversations together creates a babble.

Portraits, interiors, the tamed landscape of a garden, the view form hotel bedrooms: Hodgkin’s paintings, rooted in sites of affluent pleasure, are mostly memories of conversations and encounters, conveyed in a mosaic of flat-and-deep colours and abstracted forms. In the 1970s, these hover towards recognition – the civil servant and her marmalade blobs of guests in ‘Small Durand Gardens’, the oval haze of green, amid geometric shapes and dotted pillars, which evokes the enveloping conversation of Mr E.J.P. and his Brancusi sculpture in ‘Mr and Mrs E.J.P.”. By the 1980s the eye is rarely persuaded into precise decoding. IN the spectacular ‘In the Bay of Naples’ a blaze of fiery dots and stucco pinks is crossed by a fat snake of creamy, sea-green paint to suggest the dizzying effects of Naples on the senses, while the giant pink arrow slicing across ‘In a Hot Country’ is a brazen sexual symbol, at once enclosed by and bursting into a frame coated in red splashes, in a painting charged with lust.

Memory and desire are intimism’s vocabulary, from Proust to Matisse. The distinctive wood panels that are Hodgkin’s surfaces, with their elaborate painted frames – tough and durable, in contrast to memory’s evanescence – are, he says, chosen “so that this delicate thing will remain protected and intact”. Frames emphasise painting as object: an antique frame refracts the gold of ‘Old Sky’ and suggests Venetian architecture, for the octagonal ‘Rain in Venice’. Objects – beds, curtains, mirrors, sculptures – carry significance within the works, too.

It is impossible here not to talk of class and sex. Hodgkin, who is related to a clan of Huxleys and Frys, as his friend Chatwin wrote, “comes from an upper-middle class family of well-ordered minds and well-furnished houses”.

Chatwin saw him as a frozen Englishman painting “forlorn married couples in rooms” until in the late 1970s he nearly died of amoebic dysentery and discovered his identity as a gay man. Then “a new kind of subject, and a new mood” – the push-pull primal swirl of ‘Lovers’, the flashy scarlet columns of ‘Red Bermudas’ – dominated.

James Meyer in Tate’s catalogue strongly rejects such old-fashioned life/art symbiosis. The greatest virtue of Tate’s show is the chronological overview, which allows a more subtle reading. It announces Hodgkin, like most European modernists, as an autobiographical artist, but with no caesura in his work, so that it forms a continuum shaped by an unchanging sensibility: refined, gentle, hesitant and highly literate.

Tate, selecting vigorous near-abstractions such as ‘In Paris with You’, pointedly omits those silky, sultry, more figurative paintings that centre on the nude: the large ‘Interior with Figures’, framed by crimson sashes, where colours burst ecstatically from the ceiling of the room; the feather-light ‘None But the Brave Deserves the Fair’, with its airy plumes of white paint; the reclining naked back, from which paint seeps like sweat against a turquoise view, in ‘Waking Up in Naples’. To my mind these are among Hodgkin’s best works, and attempts to minimise his genteel eroticism are senseless. Even his many Indian paintings in tropical colours – ‘Bombay Sunset’, painted, Chatwin wrote, in “mud, blood and bile”, or the flaming orange of ‘In the Studio of Jamini Roy’ – have a touch of the colonial Raj, recalling Antony Blanche’s criticism of Charles Ryder’s paintings in Brideshead Revisited: “It was charm again, my dear, simple English creamy charm, playing tigers.”

The latest works, including the lovely ‘Come into the Garden, Maud’ (2000-3), with its flurry of leaves, fluttering shifts of dappled light and witty echoes of Tennyson, show Hodgkin transposing that delicacy of feeling to a larger scale and with freer, looser brushwork, but the effect is the same. Of course, these memorials to private joys and anxieties are irredeemably bourgeois, but that is the price of the affirmation, individuality and ardent renewal of European modernism to which this show confirms, Hodgkin’s work is a long, gorgeous, self-conscious yet tangentially English coda.” 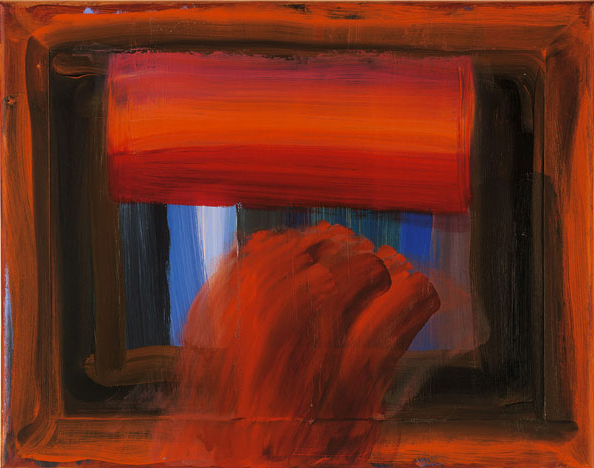 In Paris With You 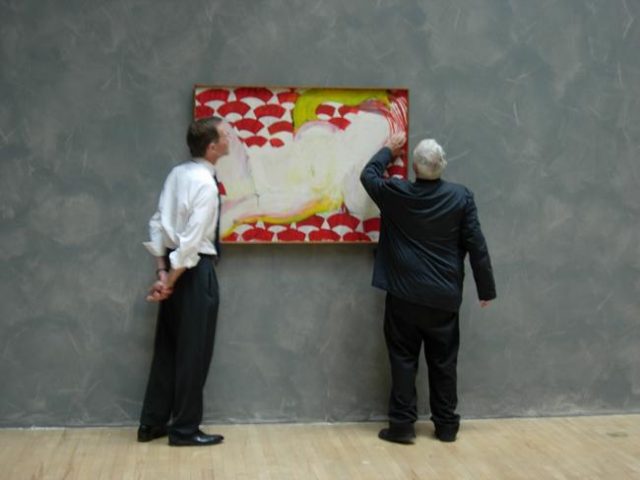