Howard Hodgkin’s recent paintings are larger than his previous average, and they are on show at the Kasmin Gallery where they show up well. Ther aer also brighter and a shade more relaxed than those he showed in 1967. But the cat-and-mouse game he plays with the world of appearances has stayed much the same.

He works very slowly. The picture called “Mr and Mrs stringer” was painted during 1966-8. Another, “Large Staff Room,” was in his 1967 show, date 1964-7. It has been thoroughly reworked since and must now be datyed 1964-9. Rarely does he start and finish a painting in the same; when it happens outside forces are likely to have been at work, like someone buying the thing and carrying it off.

This way of working is essential to him. He starts from a particular visual subject and gradually transforms it. The manner of this transformation is conditionedby various factors: by the aesthetic demands of the picture itself (composition, colour relationships, and so on), by stylistic influences (Matisse has always been important to him but one guesses at a special impulsefrom the big Matisse show), and of course by his personality. None of these contributes separately and what they offer always seems to pass through a filter of wit and irony.

The resuly is a curious intensity. Hodgkin’s titles restate the oringinal subject: a portrait, often. The pictures hove just on nature’s side of complete abstractness, so we can’t let ourselves off his notional hook by opting for a non-representational reading. We stand there perplexed, but also engaged by their vividness and quite unusual images. Hodgkin’s long involvement with Indian miniatures seems to have taught him how to join a convincing sense of life to abstraction and flatness. And time seems to bring a memorable, memory-like succinctness. 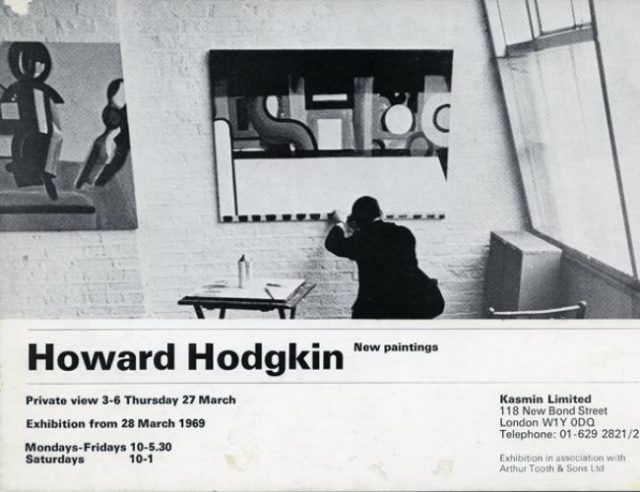