With his monumental new series of prints, ‘Acquainted with the Night’, Howard Hodgkin continues to pioneer new departures in the mediumTo mark Howard Hodgkin’s imminent 80th birthday, Alan Cristea Gallery is showing a new series of monumental prints entitled ‘Acquainted with the Night’. Hodgkin was once known for creating perversely small pictures, but during the last two decades he has worked on a larger scale, and with commanding assurance.

This has been truest of his work as a printmaker, so much so that he has quietly pioneered new departures within the medium itself. In 2009 he made the two largest etchings ever created: the 20-feet-long pair Time Goes By. Hodgkin’s new aquatints (mostly seven-feet high by eight-feet across) are also gigantic by print standards.

They were created using carborundum, a substance originally used in its solid form to grind down lithographic stones, but in this case itself powdered and mixed with PVA glue to form a paste, which the painter applies directly to an aluminium printing-plate.

The marks dry to form a granular surface, which can be inked and printed in different colours. Hodgkin describes the results as “surrogate paintings … on the edge of not being prints at all”. Working with the basic unit of a single set of preserved painterly gestures, he plays startling variations on a theme.

A wave-like form, disintegrating at its margins into specks and spatters like flecks of wind-scattered sea-spume, is successively transformed from one print to the next – both through colour and through the associations created by a title.

The first of these fertile swathes of form is printed in a hot medley of yellows, oranges and reds, on a light speckled ground. It might resemble a figure reclining, seen in silhouette through half-closed eyes at the end of a blazing day. The name given to this heat-saturated image is In India. Then, the same form mutates into a convulsion of browns, violets and vermilions: now, suddenly, it is Delhi.

Next, translated into an intense sequence of blue and ultramarine, it suggests a hugely blown-up accident involving a fountain pen: La plume de ma tante. There is a black, as well as blue, version of aunty’s pen. Then, once more with feeling, the same forms appear in black and viridian, on a mottled field of brown wash: this is Mud, and how muddy and earth-impregnated it feels.

In another set of gestures, a hatched mass of bluey-black clouds are set above veils of green and lighter blue: Stormy Weather. At the last, both plates are printed together, so that those storm-clouds hover above the wave-like form of the earlier sequence. Printed in brown, madder and ochre, their collision is itself upstaged by a huge, splash-like welter of yellow and green paint, furiously applied directly to the paper by hand. Attack, the artist calls this weird, sense-stunning work, as if declaring his intent to stay on the offensive.

“La plume de ma tante” is a phrase from French textbooks of yore, recalling the tortuously stilted exercises in vocab-learning that once tormented Ronald Searle’s cynical Fifties schoolboy, Nigel Molesworth. Its use here suggests a wry awareness that these prints themselves represent a programmatic demonstration of the artist’s methods.

How much, they prove, he can wring from the restricted means of his own self-invented pictorial language. How many different memories, places, weathers and emotions can be communicated by the self-same pictorial forms, altered by colour, combination or recombination.

The title of the series, drawn from a short poem by Robert Frost, has a hint of morbidity about it. But these are, in truth, intoxicating pictures, full of exuberant, fiery vitality. 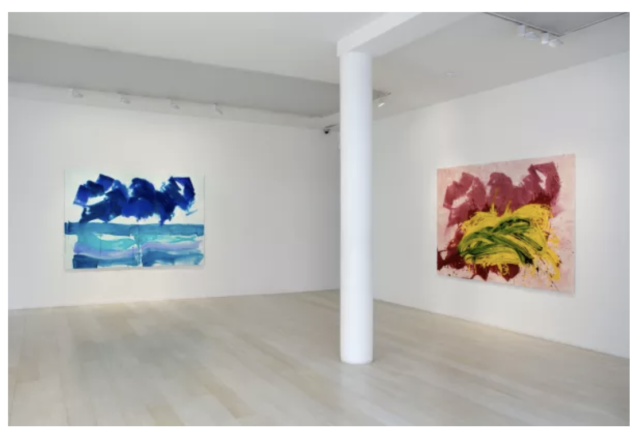