Howard Hodgkin’s is a laboured, disjointed way of painting. Or perhaps it only appears to be because it is a kind of painting which lets a prolonged, gradual process of working-out show in the final image. For Mr. Hodgkin allows the different parts he has added to a painting over a period of years, to knock against each other, asserting themselves. He amasses an apparent jumble of different feelings and thoughts about painting (though never diagrammatically).

Some of Mr. Hodgkin’s new paintings at Tooth’s, 31 Bruton Street, W.1, have more of this peculiar choca-bloc feeling about them than others. But it is by means of this “clumsiness” that Mr. Hodgkin seems to communicate his strongest feeling. When he veers forwards a smoother kind of romantic, anecdotal figurative painting, with a less complicated space, tension disappears. His forms lose their abrasive edge.

In two of the bigger paintings “Dinner at West Hill” and “Acacia Road”, the construction is especially dense. Both pictures are crowded with forms (of different colours and consistencies) associated, as the titles suggest, with some special moment for the artist, which the spectators can only penetrate in a general way. A hard-edge rectangle backs on to a soft biomorphic limb; there are openings and blank patches right on the picture pane and also fields of coloured dabs which suggest landscape. The horizontal yellow bars in “Acacia Road”, as solid as a gate, give the softer atmospheric parts of the painting emphasis by remaining distinct from them. This kind of surprise is Mr. Hodgkin’s particular strength. 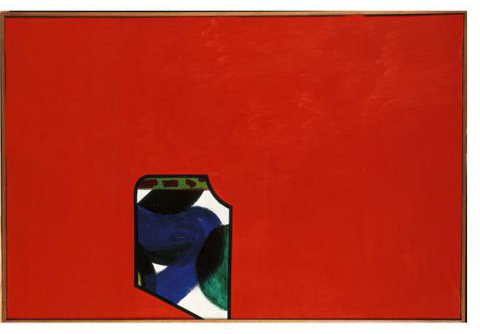