Howard Hodgkin in Milan, An artist at the height of his powers, by Julian Mitchell

Howard Hodgkin was a relatively late developer, almost forty before he found his own pictorial language. But now, with seventy looming, he uses it with such fluency, the paintings seem to come off the brush with effortless mastery. We know they are not effortless, that he works on them for months and years. But where his early works showed the effort by being clamped and tight, as though he couldn’t quite trust his own discoveries, his latest are loose and free, with such a singing authority that there is no sense whatever of the long physical and emotional labour involved.

This spring, he showed 18 ‘Piccoli Dipinti’ at the Galleria Lawrence Rubin in Milan, mostly very recent small paintings, all executed with the confidence of an artist in complete control of his medium. You might think that, having attained international celebrity, he would be resting on his laurels, but no Hodgkin show is ever the same as the last. There are familiar themes: he has never been afraid of the landscape or the weather as subjects, any more than Turner was. There are familiar devices: most of the pictures are painted on wood, and most have the characteristic frames within frames which concentrate the central image. (They can act like the curtains in a theatre; there is a great deal of dramatic confrontation in Hodgkin’s work, here notably in Border Country.) But each recent show has seemed more liberated than the last, and here the feeling is stronger and the execution more sensual than ever. There are pictures where the paint seems to burst through the frame as though the emotion can no longer be contained.

In this, Hodgkin is a most unEnglish painter, as he is a most unEnglish man. Restraint, repression, polite good taste have no place in his work – perhaps because he left school without completing it and avoided university altogether. He doesn’t ‘belong’ to any artistic movement; he is untamed by convention; he is unafraid of feeling – he has ‘the gift of tears’. All of which means he is in touch with his innermost self in a way foreign to most British artists. As is well-known now, his pictures are not abstract, they are Proustian depictions of emotions recollected – sometimes in tranquility, sometimes very obviously not. He goes down into the depths of himself, and turns his explorations into paint. The transformation is such that very little, if any, of the physical origin of the memory remains, and he very rarely gives even a hint of what it might have been. I think it might be unhelpful to know. It’s not possible to share someone else’s memories. But what we can get is the feeling behind the painting, which in turn we can transform into feeling of our own. Here the titles are open to multiple interpretations. Is Stormy Weather referring to a meteorological event or a personal crisis? When we look at Dirty Mirror where are we exactly, and is it ourselves we see? Just how ‘dirty’ is the mirror? Are we clothes or naked? What face should we put on? Even Twilight may be the end of an affair rather than the end of a day.

Hodgkin’s great popularity demonstrates clearly enough that communication is no problem. The ambiguity and allusiveness, the suggestiveness, are part of the attraction. There’s no ‘right’ or ‘wrong’ way of interpreting the paintings; all you can do is bring as much of yourself to them as you can, submitting himself to his memory. You can look and look and keep coming up with different feelings. The paintings are objects for contemplation, reflection – and sensuous delight. Paint is his familiar spirit, and it obeys him joyfully. Thinly applied in some places, in others it piles up in thick oozy corners. Looked at closely, the surfaces are as exciting and dramatic as the over-all images. As for the colour – the sheer pleasure Hodgkin takes in it is the first thing everyone notices.

My own favourites from the Milan show are the haunting Dirty Mirror, mentioned above, and North Sea. I think I probably like these so much because they brought me up short, they seemed a new departure, using a new palate. Dirty Mirror has a greenish border to a rectangle divided into light and dark. It suggests, first, a mirror whose silver has gone; then a pond partly reflecting a pale sky and partly infinite depth. You feel you could sink in it and never surface. The centre of North Sea seems grey, s the North Sea usually is. Then you look closer and find it is full of blue. The border is orange. Though it is so small, like a snapshot, it seems to contain all the sea in the world. It is at once like a grey day at Cromer, and the very idea of North, with just a memory of sunlight, never sunlight itself.

Others of these gemlike pictures are sometimes like lyric versions of work we’ve seen already. Though Hodgkin never repeats himself, he has, for instance, a great fondness for what cinematographers call ‘the golden hour’ just before sunset. Who doesn’t?, one might say. But there were two Egyptian pictures quite breathtaking in the way they conjure up an evening sky on the edge of the desert. As for sensuality, there were two luscious paintings I can only interpret as intensely erotic. And in Stormy Weather there is a rarity. When Hodgkin lets a painting out of his studio it is usually finished, and that’s that. But he was dissatisfied with this one, took it back and repainted the border. Connoisseurs will note the absence from the show of Hodgkin’s characteristic dots, and two uses of oil on card.

It is dangerous to generalize about an artist who is continuing to explore, to develop, to demonstrate his complete originality. But if anyone asks what modern British art is really like, this is the answer. You can see for yourself this summer when Dulwich Picture Gallery will be hanging nine other Hodgkins – chosen by the artist and most of them not seen in Britain before – among its permanent collection. The last person to take on this challenge was Lucian Freud, and he lost. How will this modern master look next to Poussin, Cuyp and Watteau? The show opens just after mid-summer: book now for a ringside seat. 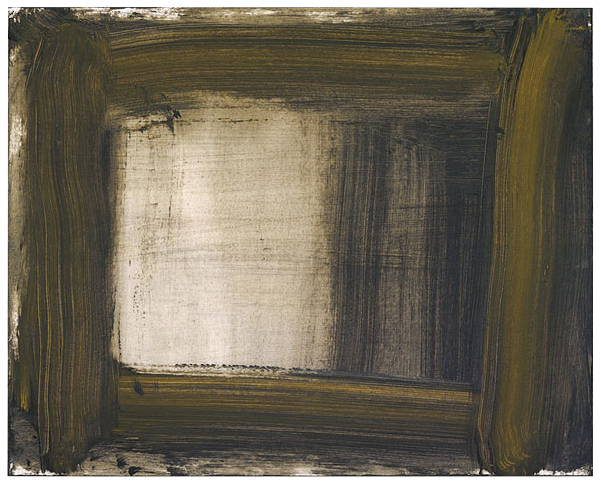