Howard Hodgkin is a painter who, though successful and highly regarded, is not as well-known as some of his friends and contemporaries. This is partly due to the fact that he is a more conventional, less sensational artist; he produces small, flat pictures in oil paint and uses traditional figurative subject matter – namely, figures in interiors. For the past few years he has painted, almost exclusively, the private lives of these same friends and contemporaries.

In his recent work, now on show at the Arnolfini Gallery in Bristol, he is still preoccupied with this theme. For, of the seven paintings exhibited, all but one are portraits and that one, Lilac Time, seems to have been a portrait that went awry in its processing. Portrait is rather a misleading word, for what Hodgkin does is to take a passing moment in the lives of his sitters and their settings, and to overlay it with formal devices and relevant personal symbolism. And since, as in the case of Mr. Mrs. Peter Blake, these small paintings can take up to five years to complete, they are obviously thoroughly considered and offered as more than just personal mementos.

But can one elicit some universal significance from such a moment of private and personal experience? The titles are explicit and if they are to be taken as word-clues to the otherwise obscure content, then we must look for some meaning in the triangle of relationships between the painter, his sitters and their life and work. Such meaning, if any, remains obscure in Hodgkin’s paintings. To digress: Patrick Caulfield painting a paraphrase of Delacroix offers various degrees of meaning depending on what we know of art history, of Delacroix and his work, of modern painting in general and of Caulfield’s in particular. But when we are faced with Howard Hodgkin’s painting of Mr. and Mrs. Patrick Caulfield (at home?), then presumably we need to know more about the Caulfields and more about Hodgkin. Yet this information is not vouchsafed to the general public to whom these works are offered.

Perhaps it is the lush and decorative quality of the paint that also inhibits communication. And perhaps this, in turn, is why David Hockney Drawing is the most successful piece in the exhibition. Hockney is generally known to have a flamboyant character, and this painting, with the red coat, green trousers, yellow shoes and yellow hair, and the flat, carpet-like setting of blues and pink, reinforces this impression. But there, again, is the esoteric significance of the yellow, toothsome oval with its phallic images. It is all so cosy and inbred, and there lingers a feeling that this is an exclusive world into which we are privileged to peer.

Nevertheless, it is decorative in the non-pejorative sense of the word, with occasional flashes of objective visual wit as in Mr. and Mrs. Richard Smith. Hodgkin is a sensuous and accomplished colourist in the European mainstream, and he can easily be appreciated on this level. Cleverly, he synthesizes the influences of various modern masters with a declared interest in Indian Miniatures to produce a personal and fluent style. And if these qualities appeal to you, and if you like to ponder on the private live of public figures, this is a completely successful exhibition. 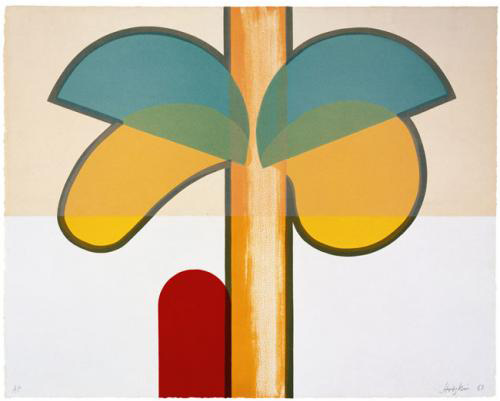