The expertise of a brilliant panellist, by Ben Luke

Throughout his career, Howard Hodgkin has filled his small paintings with a tremendous depth of expression and pictorial invention – and these seven pictures confirm his continuing mastery of the intimate. Hodgkin’s works are, he says, ‘representational pictures of emotional situations’ – so, while they initially appear abstract, they begin with specific memories. Frequently taking several years, they are painted on wood and the frame itself is incorporated into the picture itself. They often contain astonishingly brilliant colour. But as this exhibition shows, Hodgkin is consistently pushing his boundaries. Where once the panels would reveal their long gestation in copious layers of paint, here they contain few marks. In places, the paint is more like watercolour wash than the dense, luxuriant oil of old. Leaf (2007-2009) contains just one earthy-green swirl on a pale wood panel, into which the oil used to thin the paint soaks deliciously. It’s a remarkably expressive picture, its ephemeral subject a metaphor for fragility and mortality. 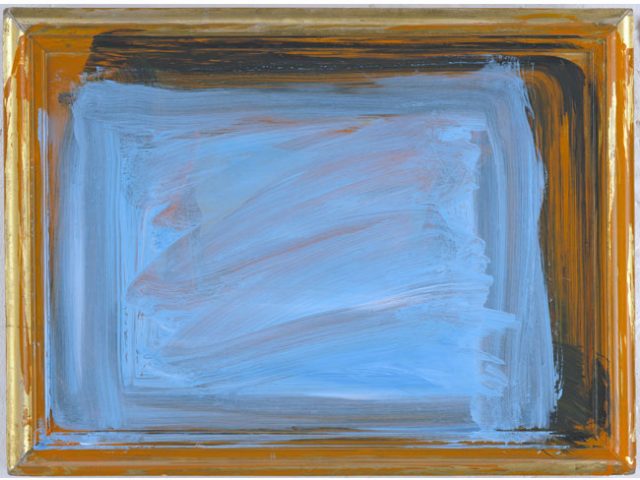