The Life of Colours, by John Russell

People prate about ‘the end of painting’; but it is remarkable how often the things most worth looking at turn out to be old-fashioned rectangular pictures that add just a line or two to the long history of Western art. They don’t lack admirers, either; Howard Hodgkin’s new show at Kasmin’s was sold out almost before it got on the wall.

Hodgkin is not, for all that, a man who makes things easy for the public. His subject-matter is orthodox enough: people in rooms, the landscape of southern England in high summer, Indian architecture with its moto perpetuo patterning and its terraces open to tall tress and kingsize raucous flowers. Nor does he have a new style for every year; fundamentally his course has changed little since he first showed at Tooth’s in 1962.

The difficulty comes, of course, from the cryptographic way in which the subject-matter is rendered. If so many people are happy to wrestle with this, it is partly because Hodgkin has developed over the last five years into one of the richest and most individual colourists now working anywhere. One has only to think of the crass conjunctions which are perpetrated with life-long impunity by certain more famous artists to realize how very much superior are Hodgkin’s procedures.

Colour has played so great a part in twentieth-century art, and has been so much abused in consequence, that it is very difficult indeed to recapture the total strangeness with which we first looked at a Matisse of 1908. From the disciplined reactions of Albers at one extreme to the feet-first exuberance of the Fauves at the other, all seems familiar. But meaningful colour-combination does not depend on science, any more than it can be achieved by random assault. It calls for the deployment of a completed human nature, and in Hodgkin’s new paintings it gets just that.

The concentric bands of pure colour work, quite often, as they would work in an abstract painting; but their full effect depends on a wide range of circumstantial reference. In a discreet way he is one of the most learned painters of his generation, and like all true Europeans he can thicken the plot without rambling. He is the aristocrat who never parades his learning, but he is also the yeoman who goes out for a certain thick plainness about the individual marks ina painting. Many of the new paintings are on wood and have a look of home-carpentry which is emphasised by Hodgkin’s new habit of painting a frame-within-the-picture and, on occasion, stepping the image back within a painted mount. European, also are the acceptance of ambiguity, and the effect of distancing which he achieves by adumbrated awnings and lattices. Those flat, lollopy, interlaced forms could only have originated in our sub-continent. They are reductive, but in the way that Matisse was reductive; there is nothing doctrinaire about them, and the paintings as a whole go their own rich way and do not dictate to use. 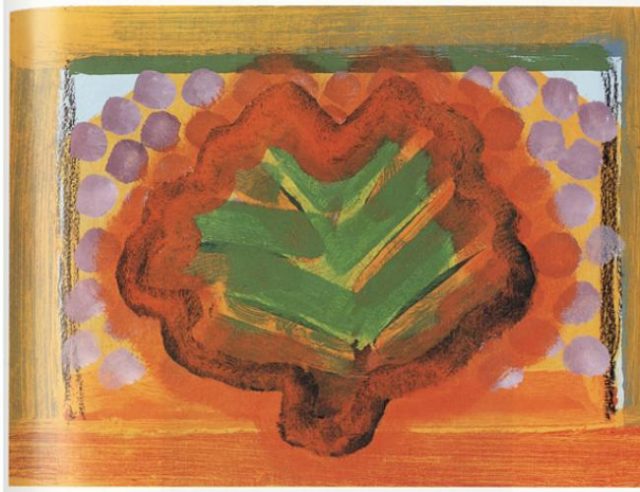