An Artist in Residence, by Howard Hodgkin

Foy Nissen’s Bombay is a small painting on wood (size 71.1 x 91.5cm) which I began in 1975 and brought with me to Oxford when I became artist in residence at Brasenose. The college provided me with a studio, a former school room in Shoe Lane, and there, with several other pictures, it hung on the damp white-washed brick wall waiting to be finished. My studio was tall with windows above the sight level of children sitting at desks and a vaguely Gothic raftered ceiling. The room was chilly and rather dark in the winter, but spatially inspiring and uniquely for me a studio in a truly urban setting, as it was just behind Woolworth’s. The studio floor was covered with discarded Turkish carpets of large design on which small armchairs were stranded here and there and drifts of flaking white-wash gathered.

The experience of being an artist resident at Brasenose was difficult only in the sense that one had to plan ahead in ways that I was not used to. Should one dine in or not – how about lunch? Links of communication had to be kept open. Meanwhile I would sit in one or other of the armchairs looking at a line of stubbornly autonomous pictures demanding completion, often feeling rather cold and undecided, thinking of my forthcoming show in New York. The fascination of some of the people I found to talk to, or rather to talk to me, and the other more obvious diversions of Oxford, sometimes interrupted my concentrated effort of memory as I thought about the view down the length of Foy’s living room in Bombay overlooking a balcony consciously covered with beautiful plants in an apartment block called Olympus.

Foy himself is no longer in the picture as the gradual substitution of pictorial devices took place and the picture became something else instead.

It was the first picture I finished in Oxford and because of this became rather a totem, and for a long time it was the only picture complete enough to talk about to other people. Showing it to the Pater Society (some of whom talked eloquently about pictorial space) was an agony clearly shared by the audience. Eventually the picture was removed from the row of paintings on the wall and taken to London, where it was bought by the Arts Council.

Being an artist in residence at Brasenose was immensely valuable to me as a painter: I have never otherwise found such perfectly difficult working conditions or such amazing company. But in return I was both inadequate and mistaken: becoming involved in the question of the cleaning of the Chapel roof for example; and I regret giving only one party. But I would like to thank everyone involved for what turned out to be a very one-sided arrangement. 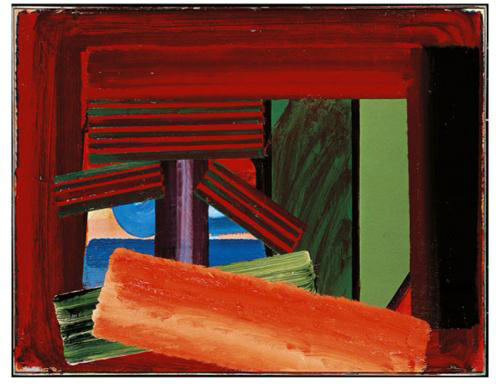