I’d been to India many times. In 1978 I was invited by the Sarabai family to work there. They’re a family of mill owners, who live in a Le Corbusier house in the middle of a Douanier Rousseau garden, surrounded by a high wire fence, in the middle of Ahmedabad.

On my first day I went to the factory where the paper is produced – very thick paper hand-made from heaps of rags. There were several attempts to dye the paper while it was being made; these all proved unsuccessful because the colour couldn’t be controlled. Also I couldn’t work in the factory as they had planned. I was given a small white bungalow, a white room, white bed – everything white, in the midst of this man-made jungle. I was left to work on my own. The weather was hot. Occasionally they would glance through the window at me, rather like eighteenth century gentry in England would look at their pet hermit.

I decided to use texile dyes on usized paper. Many of these were colours indigenous to India, and all quite extraordinary.

Twice a day, in the morning and afternoon, four or six pieces of paper were delivered on zinc plates, covered with muslin. It was an hour and a half from the time they were delivered wet, until the time they dried – two hours at the most. Using brushes and rags I worked very quickly. I became excited about the effect of the dyes on the paper, and the rapidity and complexity of the results produced. The dye would spread inside the paper while I was working, and would continue to change and modify even after I’d stopped.

I had to know what I was going to do beforehand because there would be no revision; one could add, up to a point, but once the paper began to dry, nothing could be done. That was that. Of course the paper could be re-wetted, but the same thing doesn’t happen, because the pigment is no longer part of the paper-making process.

It was exhausting work. After completing two images I’d lie down and then get up and do two more and then lie down again. I would break for lunch, and do more in the afternoon. It was a great strain because I was remembering images from all my previous trips to India. The subject matter is very straightforward. Many of the pictures were vignettes of things I’d seen, like a concrete wall with garlands of flowers hanging from it; vistas of the sky and horizon; a train crossing the distant landscape, and so on.

They are a kind of anthology of Indian images, and also a sampler of all the different kinds of language I use in my paintings, but used in an almost simplistic way.

During the two weeks I wouldn’t allow anyone in to see what I was doing. It was one of the most prolific periods of my working life. The more pleased I was with the results, the more worried I became, because the Sarabais’ rule was to keep half the finished work. So I did two of every image. Soon I realized the two images were becoming one. In the end when the time came to divide the work I didn’t split the pairs. I gave them some, and I kept some.

Once finished, everything was packed and crated. The crate was put on top of the taxi, and we drove to the airport – but when we arrived, it wasn’t there. We went back and looked for it, but it wasn’t there. I was told It’s just a loss you’ll have to accept.

I cried on the way back to London, thinking of one image and then another. Paper was sent from India and dyes were obtained, ostensibly I was going to do them again, but I knew I never could. A friend said, You mustn’t keep this to yourself. But I got awfully tired of telling the same story over and over again. It meant I could never really forget it.

Four months later I had a phone call saying the Bombay police had a parcel of mine, and did I want it? When the parcel arrived in London  there were all the works, in perfect condition. Then I thought, maybe it’s a pity they’d been found. It took a long time to get adjusted to them.

Aside from the technical aspect I don’t think there’s much one can say about them. I have always thought of them as the leaves of a book – that they’re all one work. 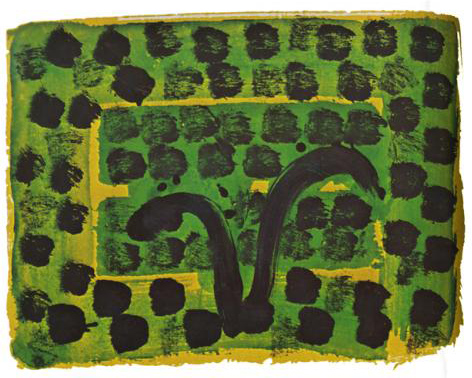