Beyond Boundaries, by Andrew Graham-Dixon

Howard Hodgkin is showing 20 new paintings in the generous, light filled spaces of Gagosian Gallery, in London. The artist is in his 76th year, but his energy and invention are undimmed. The pictures are vigorous, joyful, saturated in colour. They are painted with great freedom and collectively indicate that the painter has so thoroughly mastered his own, self-invented language of expression – a deceptively forthright vocabulary of bars and swipes and spots and veils of colour – that he can do just about whatever he wants with it. The sense of awkwardness overcome, of a beguiling, but necessary opacity, once so integral to the experience of his work, has largely evaporated.

In the past, many of Hodgkin’s formal devices conveyed his struggle to pin down and preserve individual moments of experience – to create, as he once put it, ‘representational pictures of emotional situations’. He would work on tablets of framed wood, not only painting over the frame itself, but painting further uprights and horizontals within the borders of the image. In the process he would create frames within frames, like the stage flats of a proscenium-arch theatres, as if to dramatise his sense that the feelings he wished to preserve were so fragile they needed this weighty pictorial buffering to shield them from the world. Each painting was like a different room in the artist’s palace of memory. The pictures were objects to be looked into, to be interrogated and deciphered. Many of them, most of them even, were small in scale. They had the feeling of veiled, private images, rather like Degas’ brothel-scene monotypes (and in fact their subjects were often erotic).

Over the years, and particularly in recent years, Hodgkin’s art has become more extrovert. He still works on oil on woos, but whereas he once painted on the scale of the portrait or the genre painting, he increasingly paints on the scale of the history picture – a declamatory, public, narrative form of painting. And whereas his pictures once were like window or keyholes into worlds of private feeling, drawing the viewer in, now their energies seem to travel in the opposite direction altogether. The effect is of emotions flooding out from the pictures into the rooms in which they are hung.

There are one or two exceptions, such as Privacy and Self-Expression in the Bedroom – its title wryly drawn from a book on interior design – which clearly belongs to the family of Hodgkin’s vivid, half-occluded erotica. But most of the works in the exhibition are outgoing to the point of gay abandon. Blushing is a picture flush with colour, a vibrating patchwork of pink pointillist dots interrupted by a swipe like a half-rainbow – paint made to resemble blood rushing to the skin’s surface. Artist and Model resembles an assault more than an encounter, a tsunami of greens and oranges piling into a flock of calligraphic squiggles on a field of blond, unprimed wood.

There is a lot of surface showing through in the pictures as a whole. Several have been painted on entirely unframed wooden supports, which brings them closer to the lingua franca of most large-scale contemporary painting – the unframed, stretched canvas – than almost any of Hodgkin’s earlier works. One consequence of this is a thinning of the layers that make up each picture. It also results in an increased feeling of rawness, both at the centre of the image, and at its edges where it bleeds raggedly into the space surrounding it.

The artist has always presented his pictures as shameless analogues of himself, but now he asserts that even more nakedly than ever. Some of the works are so brusque that they might, by the standards of the artist’s previous work, seem to be unfinished. Blobs and flecks of pigment float in pictorial space like snowflakes in the sky, or grass-cuttings scattered in the wind. A crowd becomes like a hail of red marks, shape-shifting as they follow the contours of an old and distinctly warped frame of wood. A garden is reinvented as a shimmering surface of green and yellow marks, suspended above a dark pool like leaves floating on water. These paintings seem more intent on conveying movement and transience than on capturing particular instants of lived experience. Collectively, they envisage life not as a succession of glimpses or glances, but more as a process of constant change. This shift in emphasis is mirrored by a shift in subject-matter. There are fewer paintings about people and social situations, and more paintings that seem to draw their inspiration from the flux and mutability of the natural world.

At the heart of the exhibition, there is a quartet of monumental landscapes playfully titled after the words of the old American fold-song, ‘Home on the Range’. Home, Home on the Range is an expansive and turbulent landscape, full of brute but majestic forms that read like shorthand equivalents for mountain, lake, sky and sun. Where the Deer and the Antelope Play is like another view of the same wild and empty place, formed this time around the contrast between a field of green and an inflamed sky above which clouds of black threaten. Where Seldom Is Heard a Discouraging Word consists of a mosaic of cobalt blue shapes, like a sky broken into shards of glass, dancing above a sea of bright orange waves. The final work in the series, And the Skies Are Not Cloudy All Day, is both climax and renunciation, a flutter of feather-edged green stipplings set adrift on the bare wood of the picture’s unprimed surface. On this occasion, the artist’s use of non finito – the deliberate look of unfinish – looks morbid and dreamy at one and the same time. It conjures up a fantasy of atomisation or evaporation, and idyllic and painless reabsorption into nature. Behind these paintings can be sensed the ghosts of other artists Hodgkin has admired. The first picture evokes the American sublime landscape tradition, from its romantic roots in the work of Charles Church and Alfred Bierstadt to its post-war apotheosis in the paintings of artists such as Barnett Newman and Mark Rothko. The second calls to mind the dissolved landscapes painted by Turner in his later years. The third picture contains elements for a homage to Matisse, while the last might almost be a distant, attenuated reflection on Claude Monet’s waterlily pond at Giverny.

Some years ago, Hodgkin was asked why he took such an interest in the history of art. His answer was that the tradition of what painters had done in the past was realty the only true home any painter working now could ever have. Perhaps that has some relevance to this new quartet of pictures. As a group, they indicate the breadth – and transatlantic span – of his affinities with those who have come before him. And yet none of them could have been created by anyone except Howard Hodgkin. At a time when so much contemporary art speaks the language of pastiche – endlessly recycling, in particular, the formulae of the Dada and Surrealist movements – it is a measure of his achievement that he should have found his place within tradition, but without sacrificing his independence. There may also be an irony embedded in that half –serious title borrowed from an old song. Far from staying home, home on the range, he is an artist who continues restlessly to test the expressive limits of his own art. 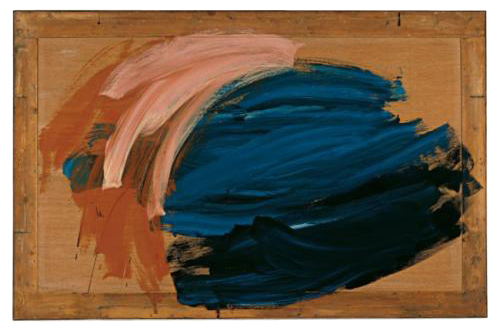