Howard Hodgkin Talks About His Work, by Leah Ollman

The London-based artist appeared proud as he surveyed the show, before its opening in late January. He scoffed mildly, though, at the “innocuous and rather silly title” — ‘Howard Hodgkin: Time and Place’. Rather generic, he lamented, even if it does point to the specificity of his work, its grounding in the observations, experiences and emotions of particular moments.

Historians haven’t always known what to do with Hodgkin, where to situate him beneath the chapter headings of 20th century art. At one point in the early ’90s, his work appeared in two nearly simultaneous exhibitions, one tracing postwar British abstraction and the other surveying 20th century British figurative painting. “People want to categorize me,” he says with a laugh, light eyes twinkling under the eaves of his wiry, grizzled brows. “It’s always irritated a lot of people who’d rather I was one thing or the other.” Because all painting is essentially abstract, arguing about such definitions “is usually a waste of breath and a waste of ink,” he says.

Critics, like historians, have been divided. Some have lauded Hodgkin as a “master of significance,” praising the work as gorgeous, painterly, earnest and clever. Others have come down hard on Hodgkin’s style, ruling his color vulgar and his approach facile and vain. Hodgkin has spoken often and publicly of feeling misunderstood and underappreciated (the New Yorker’s Anthony Lane pegged him as a “natural-born Eeyore”) especially in his native Britain, despite a career bearing all the conventional marks of success.

He has been exhibiting steadily, internationally, since the early 1960s. In 1984, he represented Britain at the Venice Biennale, and the next year he was awarded the Turner Prize. A retrospective in 1995-96, organized by the Modern Art Museum of Fort Worth, traveled to the Metropolitan Museum of Art in New York and Dusseldorf, Germany. Another in 2006-07 appeared in Dublin, London and Madrid. In 1992, Hodgkin was knighted.

‘Time and Place’, featuring two dozen paintings from 2000 to the present, is the artist’s first exhibition in San Diego. (Meyer Fine Art, a gallery not far from the museum, is concurrently showing a selection of Hodgkin’s prints through Feb. 26.) SDMA is the only U.S. stop for the show, curated jointly by the three participating venues — Modern Art Oxford, De Pont Museum of Contemporary Art, Tilburg (the Netherlands) and SDMA.

Julia Marciari-Alexander, the San Diego museum’s deputy director for curatorial affairs, had met Hodgkin in 2005, when she was working at the Yale Center for British Art, and immediately felt like family. After co-organizing a show of his work there in 2007, she embarked on another the next year, upon landing the job in San Diego. “You don’t leave Howard,” she says. “He’s an incredibly generous and captivating person. It’s really an intimate encounter, with the paintings, the person, the whole.”

Hodgkin has another connection to San Diego that goes back even further. In 1990, the museum took possession of the Edwin Binney 3rd Collection of Indian paintings, more than 1,400 pieces spanning 800 years and every region of the subcontinent. Ellen Smart, SDMA’s first curator of South Asian art, had known Hodgkin since the 1960s, not just as an artist but as a serious collector of Indian painting himself. She spoke, at the start of her six-year tenure at the museum in 1991, of her hopes to exhibit his work, his collection or both.

Hodgkin’s collection of approximately 100 paintings — “It’s been culled and culled, again and again,” he says — has been featured at the British Museum and is on loan to the Ashmolean Museum in Oxford. Hodgkin knew Binney only slightly but while in San Diego spent time studying the Crayola-heir’s collection.

Hodgkin started buying Indian paintings as a teenager, after being introduced to the work at Eton. He had a “mesmeric” teacher who, through a friend, borrowed paintings from the Royal Library and showed them to the students. Hodgkin financed the enterprise by dealing in 18th century picture frames. “I used to hitchhike to London with these picture frames and sell them to dealers. I’ve always been obsessed with picture frames for some strange reason.” Hodgkin has made frames integral to his art. He cuts wood panels to fit inside old frames that he has found and treats the entire object, frame and all, as his painting surface. Sometimes he uses the backside of a frame and sometimes the carved front. The frames “fortify” the paintings, he says, whether they reinforce a traditional sense of pictorial space as a window onto the world or operate more conceptually to sharpen focus and attention on the nonrepresentational painted mark.

Hodgkin paints with concision, allowing abbreviation and fragmentation to suggest the whole. The paintings in the San Diego show are continuous with what came before, he says, though they are a result of “thinking more and painting less.”

What is new is the large size of several of the paintings. Leaf, at less than 10 by 12 inches, is typical of Hodgkin’s intimate scale. Four paintings titled after the refrain to “Home on the Range,” measure 80 by 105 inches each.

“I always knew I would need a large format. The song that they accompany was one I heard constantly as a child on Long Island [where he was evacuated for three years during World War II]. They contain too much in the way of memory and imagination to work on a smaller scale.” 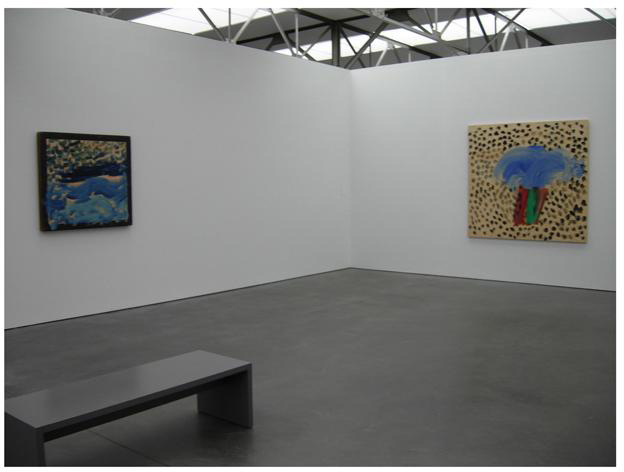